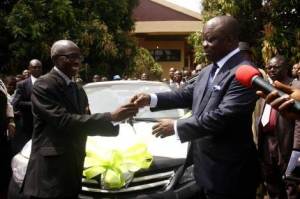 Recall that Mr Akamaka, a teacher at  the West-End Mixed Secondary School, Asaba led his students, among other schools to participate in the Literary programme organised by the Office of the Special Adviser to the Governor on Foreign Relations, Mr. Oma Djeba, on Thursday November 29, 2012 in Government House, Asaba. 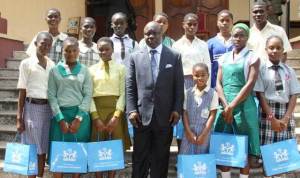 Gov. Uduaghan poses with the literary student as they showcase their Ipads

The teacher’s reward came on the wings of the impressive performance of his students in an impromptu poetry recitation organized by Governor Uduaghan, which featured 14 students from various schools. The students were also rewarded with an i.Pad each.

During the literary session, Governor Uduaghan said, “It gladdens my heart to see that literature will not die when young ones such as these come out to express themselves through poems. Taking a good look at the teacher, it is quite obvious that he has given his devotion to the job. He does not look like someone who shares his teaching time with his private business”.

The presentations took place in government house, Asaba on Thursday, January 31, 2013, about two months when the car gift and iPad promise was made by the elated state governor.