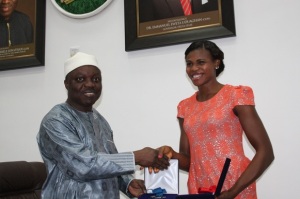 As preparation hots up for the forthcoming 2016 Olympics, Governor Emmanuel Uduaghan of oil and gas wealthy Delta State has announced a three-year financial grant of $360,000 to Delta-born Africa’s fastest woman, Blessing Okagabare to support her preparation for the Olympics.

The governor, who made the announcement on Friday, September 13, 2013 during a state reception for the world celebrated athlethe at the Government House, Asaba, also enjoined  politicians to desist from actions that could distract the athlete as she prepares for the 2016 Olympics.

Governor Uduaghan advised those who desire to appreciate Okagbare to do so quietly without politicizing her in order to insulate her for the set goal of gold medals in the 2016 Olympics.

“All support for Blessing should be done privately and quietly, we should insulate her from politics, she is a role model, she is not a political model. Okagbare is a pride to Nigeria and a pride to us in Delta State.

“Her feat has shown that youths in the state have enormous potentials for greatness, which if harnessed positively will bring great successes and positive changes to the state and the nation.”

The governor, while reaffirming his administration’s desire to produce gold winning athletes for the country at the 2016 Olympic Games in Brazil, announced an annual training grant of $120,000 for three years to Miss Okagbare to support her preparation for the Olympics and reduce competetive distractions ahead of the Olympics Games.

Uduaghan further announced a cash gift of N2.5 million for Miss Blessing Okagbare, N2 million each to Mr. Daniel Etsebiminor, the local coach that discovered Blessing and Mr. Gabriel Okon, her Athletic Federation of Nigeria Coach as well as $20,000 to Mr. John Smith, her international coach.

In addition, the Governor appointed Miss Okagbare the Youth Ambassador for the state, gave her a parcel of land in Asaba and announced the naming of a stadium in the state after her.

He also charged the State Sports Commission to identify four young potential athletes capable of winning medals that would be nurtured and groomed to represent the state and country in the 2016 Olymics Games in Brazil, promising to give them training grants for their preparations and exposure to international training facilities.

The governor thanked President Goodluck Jonathan for the honour done to Blessing Okagbare and commended the team, as well as other young athletes from the state who have won laurels in different competitions, especially at the last African Junior Athletics Competitions in Malawi promising that the state government would bestow deserving honour on them.

In his remarks, the President of the AFN, Evangelist Solomon Ogba lauded the Delta State government for encouraging field and track events development in the country, stating that such guesture has earned Delta the champion in sporting activities in the country, adding that Okagbare had placed Nigeria in the 19th position in world ranking.

Responding, Blessing Okagbare thanked Governor Uduaghan for playing important roles in her success story stating: “My career has grown from good to better but my best is yet to come.”

She appealed to the Federal and State Governments to support athletes by developing sports through funding and proper management, explaining that “proper and adequate funding, especially training grants to athletes will make them prepare properly for competitions and improve their performance.”

Blessing Okagbare displays her medal with Pastor Powell Ojogho on her right and Sunny Areh on her left.

She said that money spent on sports especially to support the training and preparation of athletes in track and field would determine the amount of laurels the country can win in competitions.

Delta state Sports Commission boss, Mr Pinnick Amaju, in his speech thanked Governor Uduaghan for his love for sports, assuring that the state would always excel in sporting activities.