DELTA State Governor, Dr Emmanuel Uduaghan has challenged clergymen to be nation builders by speaking the truth and preaching the word of God fearlessly.

The Governor gave the challenge at the weekend in a keynote address titled ‘Clergy and Nation building’ which he delivered at the consecration service for Bishop (Dr.) Fidelis Akem Ugbong at the Elohim Christian Centre International, Gwagwalada, Abuja.

According to him, “for us to succeed as a nation, we must have clergymen who tell those in government the truth” and decried a situation where clergymen play the role of sycophants because of personal benefits.

While noting that most of the nations that have succeeded have clergymen who tell their leaders the truth, the Governor reiterated that: “For us to build our nation, the clergy must draw the attention of leaders and those in authority to where things are going wrong and also acknowledge when things go right.”

Besides, Dr Uduaghan stressed the need for the presence of God to be felt in Government administration especially in Government Houses across the country adding that the Finger of God has been at work in the affairs of Delta State.

“God is helping us to finish well and strong in Delta State … we should not leave the issue of praying for those in authority to the clergy alone, everyone should be involved to ensure that we build a strong and better country”, he stated.

Similarly, he noted that the clergy should not be agents of destruction but should always ensure religious tolerance in the country.

The presiding prelate of Church of God Mission Worldwide, Arch-Bishop Margaret Benson Idahosa described Governor Uduaghan as a man of integrity and assured the Governor of the prayers of members of the church.

In a brief sermon, the presiding prelate of Covenant Network of Churches, Canada, said that the consecration of Bishop Ugbong was a call to serve.

In a similar development, the First Lady of Delta State, Deaconess Roli Uduaghan has charged religious leaders to remain focused on the Word of God in winning souls for God’s kingdom.

Deaconess Uduaghan who gave the charge Sunday, November 3, 2013 at the dedication of the Family Springs Christian Centre in Okpanam admonished religious leaders to keep the fire of the Holy Spirit alive and burning explaining that it was important for the furtherance of God’s kingdom on earth.

The First Lady who was represented by the Commissioner for Women Affairs, Chief (Mrs.) Betty Efekodha charged them to always put God first in their dealings saying that “If our religious leaders will focus on the word of God, their faith in God will be strengthened and their work in the furtherance of God’s kingdom on earth will yield results”.

Deaconess Uduaghan commended the Founder of the Family Springs Christian Centre, Pastor Matthew Ezedom for the construction of the church stating that it was important for Christians to gather together to offer praise and thanksgiving to God.

Delivering a brief exhortation the Founder of Faith Liberation Church, Bishop Nuel Ikeakanam charged Christians to always be passionate in the furtherance of the gospel despite their political or social status in the society explaining that life without God was doomed to fail.

Describing the Family Springs church building as a product of passion for the furtherance of God’s kingdom on earth, Bishop Ikeakanam stated that there could be no success in one’s life if it was devoid of passion saying “Life without passion is living by default”.

He continued “Do not become a complacent, sloppy and a lazy Christian. Let passion for the things of God be your driving force to achieve greatness on earth”.

Quoting biblical verses, he called on Christians to be dedicated in their service to God and to humanity stressing that their reward was in heaven and not on earthly possessions.

Also speaking the Founder of Family Springs Christian Center, Pastor Matthew Ezedom charged Christians to be committed in doing God’s work stating that it was a thing of joy to always serve God.

Pastor Ezedom explained that it was not going to be easy in doing God’s work explaining that they had to be completed in tune with God’s direction.

He appreciated Deaconess Roli Uduaghan for her support and prayed for God’s continuous favor upon Delta State.

Present at the occasion was the Permanent Secretary, Government House and Protocol Mr. Anthony Obuh and Special Advisers to the Governor.

Highlight of the occasion was the Dedication of the church building by the Founder of Faith Liberation Church, Bishop Nuel Ikeakanam. 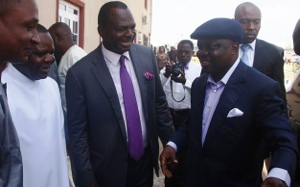