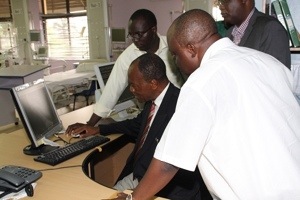 Delta State Governor, Dr. Emmanuel Uduaghan has charged politicians in Delta State to guard against heating up the polity by their actions and utterances.

Speaking against the backdrop of last Friday’s explosion at Obomkpa in Aniocha South local government area of the State with the attendant allegations and counter-allegations, the Governor stressed the need for everyone to remain calm.

Fielding questions from journalists, Monday evening, shortly after visiting the victim of the explosion, Perpetual Damasus, who is receiving treatment at the Delta State University Teaching Hospital, Oghara, the Governor urged politicians and Deltans in general not to speculate on the incident as the police was still investigating it.

“I want to urge politicians and all Deltans to be calm and patient with the police presently investigating the matter to come up with their findings. We should also conduct ourselves in a manner that will not heat up the polity especially now that political activities are on the increase,” he stated.

Dr. Uduaghan assured residents in the State of safety of lives and property re-iterating that the State Government was on top of the security situation.

The Governor, who took time to study the x-ray and scan results of the victim, urged her to be hopeful as the Teaching Hospital has the facilities and personnel to address her challenges.

The Orthopedic surgeon of the hospital, Prof. Godwin Iweagbu, said the left ankle of the lady was damaged by the explosive but assured that the threat of amputation had greatly reduced.

The victim, Perpetual Damasus, narrated how an explosive from the back of the canopy where she was sitting, hit her in the leg disrupting the arrival of the speaker of Delta State House of Assembly Rt. Hon. Victor Ochei to Obomkpa community for an event.

She disclosed that she has been given wonderful attention since she was relocated to Oghara from the Federal Medical Centre, Asaba.