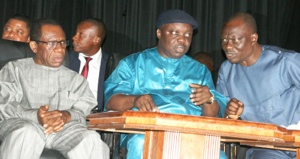 GOVERNOR Emmanuel Uduaghan of Delta State has observed that the activities of Boko Haram and the industrial action by the Academic Staff Union of Universities (ASUU) have impacted on Jonathan’s presidency.

According to him, the activities of Boko Haram and the industrial action by members of ASUU were posing serious challenge to governance in the country, but the Governor noted that the Federal Government has met the demands of ASUU except “there is something else behind it”.

He therefore called on Nigerians to give President Goodluck Jonathan the kind of support that secured the President victory at the 2011 polls, stressing that the President has good intentions for Nigerians.

Uduaghan, who spoke at a People’s Democratic Party (PDP) stakeholders meeting, weekend in Asaba, Delta State, said that although the Federal Government was tackling the issues of Boko Haram, Nigerians needed to urgently rally round the President to forestall unforeseen incidents.

“I want to appeal to every zone in our country to give President Jonathan the support we gave him during his elections in 2011”, Dr Uduaghan said, asserting, “let me assure everyone that Delta State is fully a PDP state, we are solidly and firmly behind President Goodluck Jonathan.” explaining that with his leadership there was a lot of hope for the country’s development

“Let me assure everyone that Delta State is fully a PDP state, the strongest supporter of President Goodluck Jonathan and his administration. We are strongly and firmly behind his administration and we will continue to support his policies and vision”, DR. Uduaghan said.

He emphasized that President Jonathan meant well for Nigeria and has engaged in programs that will make the country better, reiterating: “We should continue to back him strongly.”

Dr Uduaghan used the occasion to thank those who have indicated interest to become the next Governor of Delta State for not heating up the polity with their interests and informed them that he does not have the power to install his successor.

“I cannot put somebody as the next Governor, I have only one vote,” he said, adding that as a political party, the PDP was becoming stronger in the state and at the national levels.

The Governor also disclosed that 10 more members would be appointed to the Youth Development Committee and Women Development Committee respectively as an effort to increase empowerment at the local government level, explaining “that the names are being processed and in the next few days they will be approved”.

Dr. Uduaghan charged the party at the local government level to ensure that the members of the committees were not ghost workers.

He disclosed that a local government tour would soon be embarked on to further unify the People’s Democratic Party in the state.

Gov. Uduaghan charged Deltans to continue to support the Peoples Democratic Party in upcoming elections rather than pledging their allegiance to another party explaining that it was not in the state’s best interest to support another party.

He urged local government and ward chairmen to show exceptional leadership qualities by working together in peace and unity as well as practice the act of give and take to ensure the success and growth of the party at the grassroots level.

In his welcome address, the Chairman of the PDP in Delta State, Barr. Peter Nwaoboshi said the meeting was “to discuss and give account of our stewardship within this period.”

Meanwhile, earlier in the week, on Wednesday, December 04, 2013, Governor Uduaghan signed into law three bills with an assurance that nothing would be spared to restore public order, sanity and clean environment in the state.

Uduaghan decried situation where people knowingly do the wrong things asserting that the laws would be enforced as they were designed to ensure that the right things were done in the state.

While observing that while traffic behaviour has become serious situation in the state as a result of drivers and vehicle owners not obeying traffic rules, the Governor emphasised that those who violates the laws would be adequately prosecuted and punished.

On the signage and outdoor advertising law, the Governor who was presented with the bills by the Speaker of the Delta State House of Assembly, Rt. Hon. Victor Ochei, accompanied by principal officers of the Legislature, stated that politicians should be ready to do the right things always.

He advised that Deltans especially politicians should obey the laws guiding signages and advertisements while pasting posters and billboards, noting that such should be done orderly with necessary approvals.

The Governor who expressed sadness on the indiscriminate pasting of posters on the recently constructed bus stops in the state, stated that things should be properly done in the interest of the environment.