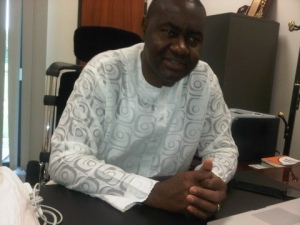 The All Progressives Congress (APC), Rivers State Chapter says it has noted the barefaced lies spewed out by the State Police Commissioner, CP Joseph Mbu, in his desperation to minimize the public outrage that has rightly trailed the death of five innocent children and the attempted murder of Senator Magnus Abe and Sir Tony Okocha, Chief of Staff to Governor Chibuike Amaechi, after policemen acting on the CP’s orders used rubber bullets to stop yesterday’s rally of the Save Rivers Movement in Obio-Akpor.

A statement by the Eze Chukwuemeka Eze Senior Special Aide on Media and Publicity to APC on Monday 13th January said, “We find it necessary to correct the wrong account of events given by CP Mbu, including his claim that we applied for police permit for most of our rallies but failed to do so for the Obio-Akpor rally. This is a blatant lie! We have never applied for police permit for any of our rallies but for police protection. We applied for police protection for the Obio-Akpor rally but instead of granting our request, CP Mbu sent his men to disrupt the rally and kill our people apparently on the orders of his sponsors in Abuja”.

The rest of the press statement made available to Blank NEWS Online reads:

“For CP Mbu to say that his men used minimum force to stop the rally raises questions about his understanding of the English Language. How on earth can “force” that resulted to the killing of five children and the shooting of two prominent politicians be described as “minimum”? This just doesn’t make sense! In other words, if Police had used maximum Force then the entire Rivers State would have been burnt on the instruction of a misguided Police ‘Politician’.

“We are however not surprised since CP Mbu is a key member of the Peoples Democratic Party (PDP), which has been behaving like a wounded lion since losing the strategic state of Rivers. Mbu does not deserve the uniform and rank he is wearing. He has demonstrated his crass ignorance of the relevant sections of the Constitution that gives Nigerians the power to associate freely without any need for police permit. He should hide his face in shame.

“We wish to declare for the umpteenth time that CP Mbu is a security risk in Rivers State. He is an agent of destabilization. Since Inspector General of Police (IGP) Mohammed Abubakar can no longer call him to order, we hereby plead with the National Security (NSA), Col. Sambo Dasuki (rtd.) to intervene and ensure CP Mbu’s redeployment. He should leave our State as his presence in Rivers portends evil!

“We will urge CP Mbu and his sponsors to pray and fast seriously that Senator Magnus Abe gets better as we can’t predict what will happen if he loses his life by the misguided stand of CP Mbu the politician.

“If this event is a test run on what we are to expect for the 2015 general polls then our country is in danger in the hands of politicians so desperate to use the Police to intimidate Nigerians.

“We will end this release with this quote by Mahatma Gandhi who had the likes of CP Mbu and his misguided sponsors in mind while making this historical statement; “Remember that all through history, there have been tyrants and murderers, and for a time, they seem invincible. But in the end, they always fall. Always”.

Also in a statement issued by the APC on Sunday, January 12, 2013, the party had expressed shock over the shooting on Sunday morning, of Senator Magnus Abe, the Senator representing Rivers South East zone and Chairman of the Senate Committee on Petroleum (Downstream), Chief Tony Okocha, the Chief of Staff to Governor Chibuike Rotimi Amaechi and the killing of five children of Rivers State extraction by men of the Nigeria Police.

A statement by the Eze Chukwuemeka Eze Senior Special Aide on Media and Publicity said The Interim State Chairman, Dr. Davies Ibiamu Ikanya, did not at first believe the news until he verified it because he, like any other right-thinking individual, could not understand why policemen paid with taxpayers’ money could turn their guns against the people, including prominent citizens who are well known to them – thus ruling out the possibility of a mistake in the said shooting.

“We wish to unequivocally condemn this premeditated murder of our five children and attempted murder of two prominent and innocent Rivers citizens by the State Police Command, which seems happy to transform into an army of occupation instead of discharging its constitutional role of safeguarding lives and property. This is a declaration of war on Rivers State and its people.

“We are holding the State Police Commissioner, CP Joseph Mbu, responsible for the deaths of five innocent kids that maybe our future political leaders by this agents of darkness and the attempted murder on Senator Abe and Chief Okocha since the shooting was carried out by a team of regular police and Mobile policemen from MOPOL 19 on the orders of CP Mbu. Acting on CP Mbu’s orders, the trigger-happy policemen had stormed the APC rally organised by the Save Rivers Movement at the College of Arts and Science, Rumuola, Port Harcourt, and started shooting rubber bullets and teargas canisters to disperse the crowd. One of the rubber bullets hit Senator Abe, who fell to the ground and would have died instantly if his aides had not quickly grabbed him and rushed him to a hospital in D/Line in Port Harcourt. It is reported that the case of the Senator is very critical and arrangement is being made by Governor Amaechi to fly him out for medical attention if he recovers from coma. Chief Okocha’s case is a bit better as he was only shot on his legs and may be crippled for life if urgent attention is not given to him.

“The police ordered everybody to vacate the venue. Several persons were injured as they scampered for safety. The police insisted that the rally must not hold, claiming that it would constitute a breach of the peace – a very spurious claim. And we are talking of a rally aimed at mobilising the public on the agenda of a political Movement, of which the police was duly informed!

“We have shouted ourselves hoarse that CP Mbu is on a mission to cause mayhem and insecurity in Rivers State but, sadly, the powers that brought him to Rivers State for this mission not only continued to sustain him but also continued to empower him in his acts of impunity in Rivers State. This single man has on various occasions abused, insulted and vilified our elected State Governor in the person of Gov. Chibuike Rotimi Amaechi, claiming that he (Mbu) is the Chief Security Officer of Rivers State and not the Governor as stipulated by the Constitution of the Federal Republic!

“This single man has on various occasions given police cover to GDI, the political pressure group of President Goodluck Jonathan and Supervising Minister for Education, Chief Nyesom Wike, while denying the same services to other political groups in Rivers State, including Save Rivers State Movement while we sustain the Police with Rivers State fund. This single man since he came to Rivers State has promoted criminality in various ways and has even made himself a member of PDP, attending their meetings!

“In view of the foregoing, we wish to make it clear that the blood of the five innocent kids that were slaughtered by the Police are on CP Mbu’s head and also on the heads of his sponsors. We meanwhile appeal to Nigerians to join us in praying for the survival of Senator Abe and Chief Okocha. By God’s grace, we shall overcome as the plot of intimidation will not deter us from salvaging Rivers State from the PDP led Federal Government whose hatred and disdain on our people are now legendary.

“Dr Ikanya demands for the immediate release of Hon. Ike Chinwo within 24 hours unfailingly who was arrested by the Police after the mayhem for no just cause”.