In a bid for the people of Southern Nigeria to take a common position on the forthcoming National conference, the 4th General Conference of the Southern Nigeria People’s Assembly (SNPA) has held in Asaba, the Delta state capita, with a plea on all stakeholders in the nation’s polity to tow the line of unity and national interest.

In his remark, the Coordinating chairman and leader of the South South delegation, Chief Edwin Clark, urged the people and delegates to the National Conference to be poised to address issues of national interest without fear or favor as a result of equal fundamental rights, as enshrined in the constitution.

According to him, “As a people with peculiar concerns, our responsibility is to seize this rare opportunity at our disposal and harness our common endowments to chart a new course for our people and posterity”.

He also appealed to the 17 governors of Southern Nigeria to come together and collaborate without prejudice to party affiliations and political differences, to tie the knots of Nigeria’s historical, cultural and social identities for posterity.

“While I acknowledged the right to free association, the exercise of such freedom must place premium on national interest and ethos above narrow and self-propelled interest”, he stated.

In the same vein, the host traditional ruler HRM (Prof.) Chike Edozien, Asagba of Asaba and the Chairman of South South Traditional Rulers Council, HRM Edmund Daokoru, expressed concerns over the security challenges and political upheavals that has bedevilled the country but described the confab as an encouraging step of conceivable and logical discourse for national unity

Although they decried past military interventions where traditionally constituted authorities were undermined, the royal fathers also noted that despite some set-backs, the present democratic government should ensured that issues of traditional rulers’ relegation in the past is redressed, hence the traditional rulers are closer to their people. 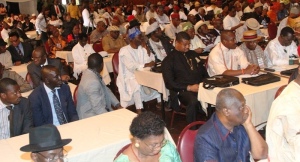 Cross-section of delegates and participants

On his part, former Vice President of Nigeria and leader of the South-East delegation, Dr. Alex Ekwueme, expressed hope for a better solidarity of Nigerians to achieve a national cohesion.

Also, the leader of South West delegation, Bishop Emmanuel Bolanle Gbonigi, in his speech clamoured for a total rejection of conditionalities introduced by the Federal Government’s 75 % majority clause and called for two-third majority representation, and urging the Federal Government to call for a referendum ahead of the confab.

He also condemned the activities of the Boko Haram and called on Northern leaders in the country to curtail the senseless and ugly trend occasioned by the acts of the insurgents.

While presenting his lecture titled, “The Imperative of Regional Integration on National Cohesion and Unity”, the former National Secretary of Ijaw National Congress, Chief F. J. Williams opined that a regional cooperation is necessary despite the fact that Nigeria is gliding recklessly towards the precipice as a result of near systemic failure in the Nigerian polity and ethnic nationalism which breeds alienation and eventual violence.

He further said that although the foundation of which Nigeria is laid may have been faulty, there was the need to address issues of stability at the forthcoming confab.

Chief Francis William also said: “President Jonathan has the right to contest for the Presidential position in 2015” and called for regional cooperation.

In his opening address, Governor Emmanuel Uduaghan of Delta state assured Nigerians that the country would not disintegrate in spite of the challenges and ravaging fire of ethnic nationalism in the country.

Governor Uduaghan who gave this assurance at the Opening ceremony of the Southern Nigeria Peoples Assembly [SNPA] 4th General Conference in Asaba said that the national conference sanctioned by President Goodluck Jonathan’s administration has provide avenue for Nigerians to deliberate on issues that will move the nation forward.

He explained that though the Jonathan’s administration was beset by series of challenges, the President has handled these challenges with maturity and sincerity.

He observed that one of such challenges was the issue of Boko Haram, and emphasized that the activities of Boko Haram has been reduced and there are signs that the militant group will see reasons to embrace peaceful co-existence in the country.

He disclosed that: “The Jonathan’s administration has done a lot to improve the nation’s economy and engendered a lot of growth and foreign direct investments and interest”, stressing that the benefits to the masses will take some time to trickle down to them.

Dr Uduaghan commended the people of Southern Nigeria for ‘talking’ noting that those who are talking often do not engage in violence.

“President Jonathan is providing a platform for us to discuss with the national conference and we are free to say anything in this world except the disintegration of Nigeria and when we discuss, issues are resolved,” the Governor said, adding that the people of Southern Nigeria should be prepared to make their points known during the conference.

He emphasized, “let us be hopeful, let us be positive because, the future of Nigeria is bright, Nigeria will not disintegrate in the era of President Goodluck Jonathan,” adding, “no ravaging fire of ethnic nationalism can consume this country.”

One response to “National Confab: Southern Nigerians Seek Cohesion, Equal Rights *As Uduaghan Assures That Nigeria Will Not Disintegrate”