MORE than 100 fire incidents ravaged property worth millions of naira in Delta State, during the 2015 Yuletide season, the Commissioner in charge of Bureau for Special Duties, Hon. Chika Ossai has said.

Hon. Ossai made the disclosure during on the spot assessment of fire incidents in different parts of Delta State and visits to the victims.

Accompanied by staff of State Emergency Management Agency (SEMA), Hon. Ossai visited Asaba, Agbor, Ughelli, Warri, among others, commended the fire fighting skill of staff of Delta State Fire Service which ensured that no life was lost in all the incidents.

“First of all, we give thanks to God that no life was lost, but, it is very sad that at this difficult time in the nation’s economy, Deltans lost their property to fire,” he said, adding, “our Governor, Senator Dr Ifeanyi Okowa is very sad and we join him to commiserate with those who were affected by fire because our men attended to 41 fire incidents in Asaba, 32 incidents in 32, 10 incidents in Agbor and others that we are awaiting documentation.”

The Commissioner added, “from available records and reactions from the fire victims, you can see that the fire fighters were very active during the season, they helped in putting out the fire in several places.”

On what the state government will do to ameliorate the sufferings of those affected by the fire, Hon. Ossai said, “it is unfortunate, the SEMA will collate data and we will see what we can do to assist the victims, but this is time, for all if us to be our brothers keepers by assisting the victims.”

“Obviously, too, we are not to conscious about fire, we are not taking measures to check fire outbreaks; people are still engaged in bush burning,” he said, asserting, “we should learn to switch off our electrical appliances when they are not in use and we should develop a culture of having fire extinguisher.”

The Managing Director of Anioma Petroleum Resources Limited, Asaba, Mr Ukwandi Sylvester, thanked the state Fire Service for their efforts which stopped the fire that ravaged his petrol station from spreading to adjoining structured while the Principal of Ika Grammer School, Agbor, Venerable Charles Okunbor disclosed that the quick response of the fire service also, checked the fire that razed classroom block at Ika Grammer School from spreading to other buildings. 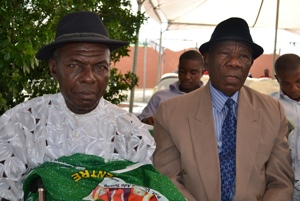