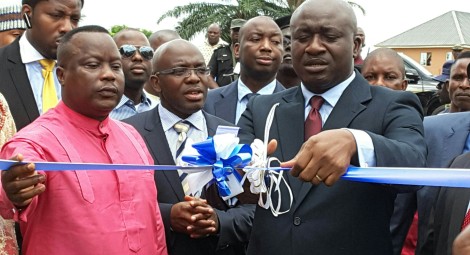 Delta State Governor, Senator Dr. Ifeanyi Okowa, has lauded Midwestern Oil and Gas Company for their exemplary show of corporate social responsibility as well as reiterating that the government will always partner with organisations that are committed to the S.M.A.R.T agenda.

The Governor, who was represented by the Commissioner of Information, Mr. Patrick Ukah, stated this during the commissioning ceremony of the Amenity Ward at Kwale Central Hospital in Ndokwa West Local Government Area constructed by the company.

He advised other corporate bodies in the state to emulate Midwestern Oil and Gas Company in making their host communities feel the impart of their presence.

The Managing Director of Midwestern Oil and Gas Company, Engr. Charles Odita, highlighted that his organisation and its Joint Venture (JV), Sun Trust Oil, constantly search for ways and means of improving the lives of its host communities.

He added that it is in pursuit of their social responsibilities that they have implemented various projects and activities to positively impact every aspect of life in their host communities which includes education, business, and infrastructure, among others.

He added that the goodwill enjoyed by his organisation is attributed to maintaining peaceful and cordial co-existence; attesting that the community has shunned vices related to pipeline vandalism, crude oil theft, and attack on facilities.

The scholarship scheme, aimed at promoting academic excellence and improving the requisite skills among the youths of its host communities and Delta indigenes, was based on merit.

At Akala in Umusadege-Ogbe Community, Ndokwa West Local Government Area, the representative of the Governor, unveiled the plaque and read the commissioning warrant of the fully rehabilitated road.