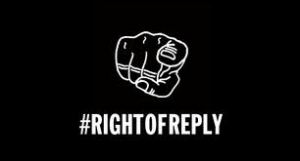 Our attention has been drawn to a mischievous publication by Sahara Reporters to the effect that the Honourable Commissioner for Information in Delta State, Mr. Patrick Ukah, threatened to resign his appointment because of what it claimed was the Commissioner’s grouse with, “Governor Ifeanyi Okowa’s decision to split the ministry.”

Much as we do not usually dignify this type of obvious yellow journalism with a response, we would like to make the following clarifications in order to disabuse the minds of the unsuspecting reading public and the friends and associates of the Commissioner who have besieged his office with calls since the report was published.

The entire report is baseless, unfounded and tendentious. The story exists only in the figment of the imagination of Sahara Reporters, a medium very well known for its brand of terrorism journalism which it dubs as “citizens journalism”, whatever that means.

In the first place, the Ministry of Information has not been split into two, and as such no new ministry has been created. The Governor just recently approved the creation of a Directorate of Orientation out of the Department of Orientation in the Ministry to be headed by his Senior Special Assistant, Orientation and Social Mobilisation now renamed Executive Assistant.

Secondly, the moving of the ICT Department and Website to the Government House had occurred before Mr. Ukah was appointed Commissioner in charge of the ministry. And we all know the proximity and interdependency of the website and the ICT Department. That the two are housed in the same place was to ensure efficiency in their operations and engender better coordination.

In the light of the foregoing, Mr. Ukah could not have contemplated, let alone threaten, resignation. It is, therefore, clear that the report by Sahara Reporters is calculated to cause mischief and disaffection in the government of Delta State.

Mr. Ukah, for the avoidance of doubt, enjoys a good working relationship with His Excellency, Senator Dr. Ifeanyi Okowa, and is irrevocably committed to helping the Governor achieve his goal of prosperity for all Deltans.