Governor Ifeanyi Okowa of Delta state has decried the destruction of oil facilities in the Niger-Delta region, noting that it has compounded the financial woes of the nation as oil prices has not only reduced but, the country could not increase oil production to boost revenue.
The Governor stated this during a stakeholders meeting on creating a peaceful atmosphere for the development of Delta State and the Niger Delta region on Wednesday, June 29, 2006 in Warri.
He said, “we are having reduced oil price and reduced quota of production in the country but, the greatest effect is on Delta State; this state used to receive over N20 billion and just this month, we got only N3 billion.”
He however, emphasized that in support for Mr. Ibe Kachikwu, Minister of State for Petroleum, a Deltan, there should be cessation of hostilities, reiterating, “today, we have a Deltan who is the Minister of State for Petroleum, it is not all about politics, he is not from an oil producing area of the state, so his preference will be for all and he has an open heart, he is not playing active party politics, we need to provide enabling environment for him to succeed, we should support him, we should avoid pipeline vandalism.”
Also, in a bid to ensure peaceful co-existence in Delta State, Governor Ifeanyi Okowa has said that from 2017, there will be award for most peaceful ethnic groups in the state.
According to the Governor, “from 2017, there will be a price for the President General of ethnic nationality that is most peaceful; this stakeholders meeting is to appreciate all of us including our traditional rulers for the roles we are playing for us to have peace in our communities, we don’t need to wait for crisis before we talk about how to build on existing peace.”
“When peace building becomes a collective will of everyone of us, we will achieve the desired results in bringing development to our people,” the Governor said, “we are glad that peace has returned to our communities, we need to work together because, we have always been known as a very friendly people, a people who are proactive and I believe that each and everyone of us gathered in this hall will like to see rapid development, move around unhindered.”
Security chiefs at the occasion called on Deltans to give useful information to security operatives to nip situations in the bud observing that criminality especially, pipeline vandalism has long term effects on the environment.
Others who spoke at the occasion, including traditional rulers called for the implementation of local content in the oil sector and proper equipping of security operatives. 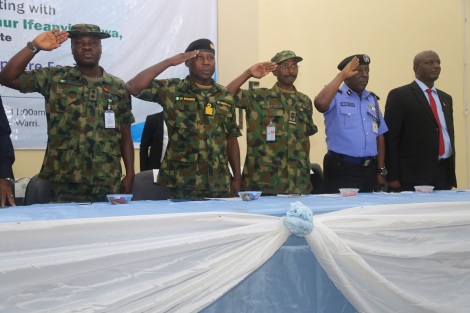