The Delta state Chairman of the Caretaker Committee of the Union of Tipper and Quarry Employers of Nigeria (UTQEN), Comrade Chukwudumebi Eluaka has urged members of the Union to remain law abiding in the discharge of their duties, aimed at strengthening national development.

Comrade Eluaka who stated this while receiving the leadership and members of the Union from Aniocha South local government in his office at the Union Secretariat in Asaba, explained that “as a union, we have built peace within ourselves and we cannot work in isolation, so, we collaborate with other trade unions to ensure industrial harmony and cohesion in our activities.”

“My interest is for us to have a peaceful and progressive union and as at today, we have our people working in twenty one local government areas of Delta State and we are making progress as employers of labour and at the same time collaborating with government and banks to boost member’s investments because we deal with heavy duty equipments like tractors, pail loaders, tippers, among others.”

He thanked the Trade Union Congress of Nigeria (TUC) for helping to resolve some of the leadership issues between him and the suspended former Union Chairman, Mr. Kanayo Enenmoh but expressed dismay over the continued use of policemen by Enenmoh to harass and intimidate members of the Union who are legally protected by law to operate within the state, adding that such actions amount to contempt of court, since there is a pending suit filed by him (Enenmoh) against the national executive committee of the Union.

Comrade Eluaka therefore called on the Inspector General of Police, Mr. Ibrahim Idris and the Commissioner of Police, Delta state Command, Mr. Zanna Mohammed to urgently direct their officers to desist from further harassing members of the Union who are carrying out their legitimate duties across the state.

Earlier, in his speech, Chairman of the group, Comrade Joseph Ebube who led the delegation of members of Union of Tipper and Quarry Employers of Nigeria (UTQEN) in Aniocha South local government, said the solidarity visit was to formally notify the State Chapter of their willingness to join 20 other local governments to fully support the leadership of Comrade Chukwudumebi Eluaka because of his fortrightness and development prowess, especially in the area of youth employment.

He however appealed to the State executive of UTQEN under the leadership of Comrade Chukwudumebi Eluaka to help curtail the excesses of unauthorized persons who engage in illegal collection of tolls from tipper drivers and urging them to remain focused , explaining that a lot of transformation has been made, unlike the long tenure of the suspended ex-chairman, Mr. Kanayo Enenmoh without structure on ground. 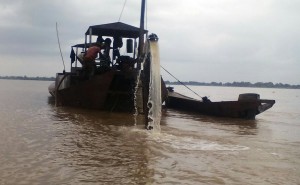 Highpoint of the solidarity visit was a tour and inspection of the several tippers and sand dredging facilities owned by the state Chairman of the Caretaker Committee of UTQEN, Comrade Chukwudumebi Eluaka as well as over seventy eight persons who are working as members of Tipper and Quarry union, at the operational site in Marine Waters, Cable Point, Asaba.

Meanwhile, the Trade Union Congress of Nigeria (TUC) had on August 03, 2016 issued a letter introducing Comrade Chukwudumebi Eluaka as Delta state Chairman of the Caretaker Committee of the Union of Tipper and Quarry Employers of Nigeria (UTQEN).

” I wish to formerly introduce to you Comrade Chukwudumebi Eluaka as the state Chairman of the Caretaker Committee of the Union of Tipper and Quarry Employers of Nigeria (UTQEN), Delta state.

“The Union of Tipper and Quarry Employers of Nigeria is an affiliate of the Trade Union Congress of Nigeria (TUC) with jurisdictional scope to unionized workers and owners of tippers and quarries throughout the country.

“Please give Comrade Chukwudumebi Eluaka all necessary co-operation and support to enable him carry out its legitimate duties as an interim State Chairman of the UTQEN.” 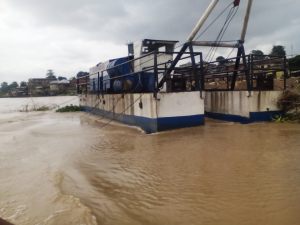 One of Eluaka’s many dredgers

Despite the recogniion and continued efforts to ensure that the Union is afloat in creating massive employment to teeming youths in the 25 local government areas of the state by the Comrade Chukwudumebi Eluaka led executive which is currently in control of 21 local governments, Mr. Kanayo Enenmoh has engaged in litigations and harassment of members of UTQEN.

However, Comrade Chukwudumebi Eluaka has moved on despite the unwholesome attitude of Mr. Kanayo Enenmoh, whom he said had led the Union since 2005 without any recorded achievement.

According to the State Chairman of UTQEN, Comrade Chukwudumebi Eluaka, “Mr. Kanayo Enenmoh has since seized to be Chairman of the Union, having been placed on indefinite suspension since the 6h of Octber, 2014 by the Elder Joseph Adodo led National Executive Council of UTQEN for misconduct, high-handednes and anti-union activities, leading to his (Eluaka) appointment as Acting State Chairman.

He added that the said Mr. Kanayo Enenmoh who had earlier accepted his suspension from office later filed Suit No. NICN/EN/770/2014 between Comrade Kanayo Enenmoh and Eight others Vs. Elder Joseph Adodo and Three others at the National Industrial Court, Awka, Anambra state where he is challenging his suspension.

He further posited that the actions of Mr. Kanayo Enenmoh amounts to contempt of court and prejudicial to the suit filed by himself, hence his harassment of members of UTQEN is capable of causing crisis and breakdown of law and order in the Union in Delta state.

He therefore called on well meaning individuals and stakeholders in the tipper and quarry industries, as well as security operatives to disregard claims made by Mr. Kanayo Enenmoh in regard to the leadership of UTQEN in Delta state which is presently intact, considering its contribution to the development of the state and the country through job creation, especially among the vulnerable youths in the society. 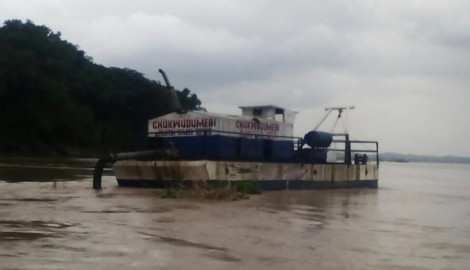