Delta State Commissioner for Information, Mr. Patrick Ukah, has said that the celebration of this year’s Armed Forces remembrance day is very unique in view of the exploits of the military in the fight against Boko Haram.

Speaking during the grand finale of the ceremony held on Sunday, January 15, 2017 at the Cenotaph, Asaba, the Information Commissioner stated that the gains recorded by members of the armed forces is a devastating blow to the activities of insurgents who have been terrorizing some parts of the country for some time.

He noted that the routing of the insurgents from their stronghold, the sambisa forest, and the take over of the hitherto dreaded forest by the Nigerian armed forces is commendable.

The Commissioner for Information congratulated them for their bravery and urged them not to rest on their oars until the remnants of the terrorists are arrested and brought to book.

Mr. Ukah called on Nigerians to continue to support and, most especially, pray for members of the armed forces who risk their lives to ensure the protection of law abiding citizens.

He prayed for the repose of the souls of those who lost their lives in the course of duty, in addition to good health and long life for serving and retired officers and men of the Nigerian armed forces.

The 2017 Armed Forces Remembrance Day celebration was marked throughout Nigeria with the Governor of Delta State, Senator Dr Ifeanyi Okowa leading prominent Nigerians to lay wreath on the foot of the statute of the “unknown soldier.”

The ceremony was of great significant as Asaba witnessed its first rain fall shortly before the commencement of the ceremony which took place at the Cenotaph, Asaba and featured parade by the Nigerian Army, Air Force, Navy and the Nigerian Legion.

Though, the rain was not heavy, it added to the solemn nature and reduced dust at the event which was attended by civil war veterans who adorned their ceremonial uniforms.

The ceremony which was witnessed by former Deputy Governor of Delta State, Chief Benjamin Elue, the Chief Judge of Delta State, Justice Marshal Umukoro, traditional rulers, clergymen, political office holders, among others also, featured a 21 one gun salute in honour of the fallen heroes while pigeons were released to signify peace.

Every year, on January 15 the Nigerian government honours soldiers who died in wars, especially, the World War and the Nigerian civil war in pursuit of the pursuit of peaceful co-existence. 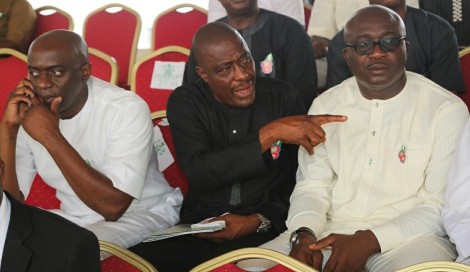