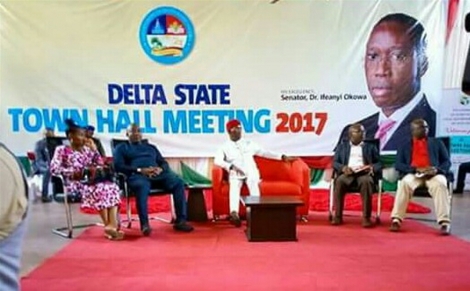 The Executive Director (Finance and Administration) at the Delta State Oil Producing Areas Development Commission (DESOPADEC), Bashorun (Hon.) Askia Ogieh, JP, has lauded Governor Ifeanyi Okowa for initiating the on going Town Hall meetings which affords the people at the grassroots level the opportunity to interact with government for proper understanding of its policies and dividends to the people.

Gov. Okowa (left) and Bashorun Askia (right) during inspection of Emore Grammar School, Oleh ahead of the Town Hall Meeting.

Bashorun Askia, who made the commendation during the meetings held in Ozoro and Oleh, headquarters of Isoko North and Isoko South local government areas respectively, noted that the parley gave room for the people of Isoko Nation to appraise the government’s impact on the people and make necessary demands.

According to him, “Governor Ifeanyi Okowa felt there is the need for direct connect with the people. It goes to show that he believes in the electorates, having made promises during his campaigns, he has decided to re-examine the level his policies has impacted on the people and where necessary, make possible development impact in the case of infrastructure growth and appointments.”

He also commended the Isoko people for coming out enmasse to throw their overwhelming support behind the governor in a bid to solidify the sustainable development, peace and unity among Deltans.

He however assured that the Governor Ifeanyi Okowa administration is determined to take an immediate action on the various demands with an aim to improve the lives of the people in terms of job creation, appointments and to build trust between government and the people.

While praising the governor for not restricting the interactive sessions to only members of the ruling party in the state, he said it was a pointer to the fact that Governor Okowa is non partisan, detribalized and humble in his approach to effective governance of the state.

Bashorun Askia therefore encouraged the people of Isoko South and Isoko North not to relent in their support, saying “The turnout of our people has proven that the Governor is doing his very best despite the glaring financial challenges being faced in terms of dwindling allocations from the Federal government and poor internally generated revenue receipts.”

He said that inspite of the challenges, the Governor Okowa administration has intensified efforts in building roads, schools, health centres and other people oriented projects for the common good of the people across the state, adding that the Delta State Oil Producing Areas Development Commission (DESOPADEC) has also been engaged in complementary roles of providing basic infrastructures in the oil producing communities.

*Gov. Okowa receives copy of an address presented by President General Isoko Development Union (IDU), High Chief Iduh Amadhe.
***Photos by Prosper Edo.
Copyright © Blank NEWS Online.
All rights reserved. Permission to reproduce, publish, broadcast, rewrite or redistribute in whole or in part is only granted subject to appropriate credit being given to Blank NEWS Online as the source.