GOVERNOR of Rivers State, Barr. Nyesom Wike, on Wednesday , December 13, 2017 commissioned and inspected some projects executed by his counterpart in Delta State, Senator Dr Ifeanyi Okowa.
Wike, former Governor of Delta State, Chief James Ibori and other top politicians were taken round the projects by Governor Okowa who beamed a satisfactory.
Some of the projects inspected and commissioned include, the storm drainage project which will channel flood water from the Direct Labour Road, Jesus Saves Road and others to the River Niger, the Cable Point dual carriage way and Madonna School/Joseph Ebolo Roads in Okpanam, Oshimili North local government area of the state.smile as he moved to the project sites in Asaba and its environs.
Wike who marveled at the quality of projects executed in the state, described Governor Okowa as a performer, a promise keeper and dependable personality.
“I identify myself with people who have something to show, I want to thank Governor Okowa who invited me to commission this project, I know Governor Okowa is doing very well, when you make a promise, fulfill it, Okowa has fulfilled his promises to Deltans, my coming here today has shown me the level of development in Delta State, particularly in Asaba; I am impressed with what I saw today, and happy with the quality of the projects and contractors,” Wike said, shortly before cutting the tape signaling the commissioning of the road.
Former Governor of Delta State, Chief James Ibori had unveiled the statue of Nnebisi, the founder of Asaba before the road was commissioned at an event, Governor Okowa described as important to the people of Asaba.
Governor Okowa disclosed that the road project was a request made by the Asagba-in-Council during his campaign visit to Asaba, assuring that his administration will continue to execute projects in Asaba and different parts of the state.
Chief Ibori commissioned the Madonna School/Joseph Ebolo Roads in Okpanam, Oshimili North local government area of Delta State.
Representative of the Asagba of Asaba, the Iyase of Asaba, Chief Isioma Onyeobi in his speech at the commissioning of the Cable Point road, went memory lane, describing Asaba as one of the first capitals of Nigeria.
He commended Governor Okowa’s administration for his commitment to the development of the state capital while the former Speaker of the Delta State House of Assembly and member representing Oshimili South constituency in the Delta State House of Assembly, Rt. Hon. Peter Onwusanya in a welcome speech, said Governor Okowa has endeared himself to the people through the execution of quality projects. 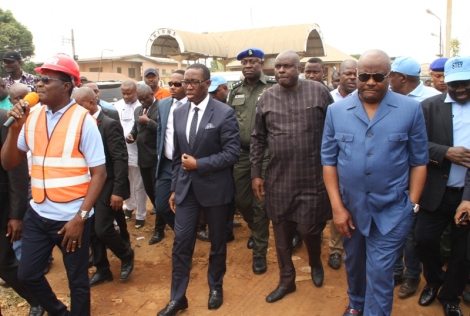