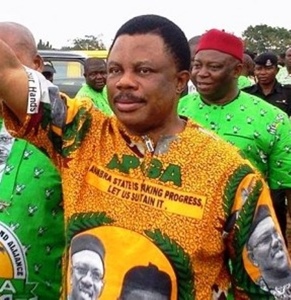 The candidate of the All Progressives Grand Alliance (APGA), Chief Willie Obiano, has won the Anambra governorship election after polling a total of 180,178 votes to beat his other 22 contenders from different political parties.

Professor Chukwuemeka Onukogu, the Resident Commissioner of INEC in Anambra state declared in Awka that Mr. Obiano won the election by polling 180,178 votes in 19 local government areas in the state.

The election results declared by INEC after the completion of the supplementary elections on Saturday, November 30, 2013 indicates that the total votes won by the APGA candidate constitutes 25% of the votes in at least 19 LGAs out of the 21 LGAs in the state.

Recall that the original election of November 16, 2013 and the rescheduled exercise in Obosi on November 17 which were declared inconclusive by INEC gave rise to the supplementary exercise.

The supplementary election took place in 210 polling units in the state. They included 160 polling units in Idemili North, 17 in Onitsha South, four in Oyi, 6 in Anambra West, 1in Aguata, 3 in Ayamelum, 1 in Anambra East, 1 in Anaocha, 2 in Awka North, 1 in Awka South, 2 in Ekwusigo, 1in Idemili South, 3 in Ihiala, 2 in Nnewi South and 4 in Orumba North.

Chief Willie Maduabuchi Obiano holds a B.Sc. Second Class Upper Degree in Accounting from Unilag (1979) and an MBA in Marketing also from same university. He is a Fellow of the Institute of Chartered Accountants of Nigeria (FCA).

Chief Obiano started his banking career as Officer in First Bank in 1981 from where he moved to Texaco Nigeria Plc as Accountant. He was promoted 4 times in his eight-and-half-year-service at Texaco to become Chief Internal Auditor.

He is a specialist in Bunkering, Lube-blending and Refinery Audits and was part of the team that audited Texaco Refinery in Rotterdam, Netherlands in 1989.

In 2012 Chief Obiano retired as Executive Director of the Mega Fidelity Bank (and No. 2 man). As Executive Director, Chief Obiano was in-charge of Business Banking (Corporate Banking, Non-Bank Financial Institutions, Treasury, (Naira and Foreign Exchange, Oil & Gas, Telecom & Food and Beverages, Transport and Aviation). All the Regional Managers of the bank reported through him to the MD/CEO.

Chief Obiano is a no nonsense tactician that you cannot miss in a crowd. He is married with a beautiful daughter.

The Anambra State Governor elect, Mr Willie Obiano, in an acceptance speech in the early hours of Sunday, described the victory as a moment collectively worked for and hoped for, saying that the expressed will of the people have been finally enthroned.

“Ndi be anyi, (my people) I stand here tonight in the shadow of history. You made history when on November 16 and today, you cast your votes in favour of APGA. In doing so, you have affirmed the life long struggle of our great father, Dim Chukwuemeka Odumegwu Ojukwu. You also upheld his view that our people should preserve our heritage through one united political roof. Ndi Anambra (Anambra people) I want to thank you for honouring the memory of late Ikemba,” the All Progressives Grand Alliance member said.

He then promised to continue the good works of incumbent governor Petr Obi and expand the boundaries of development to move Anambra state into the map of rapidly advancing states.

The leadership and members of the All Progressives Grand Alliance, APGA, have also commended President Goodluck Jonathan for his neutral position in the just concluded Governorship election in Anambra state.

The National Chairman of APGA, Victor Umeh, in his submission said that though the party grappled with a lot of issues before and even after the election, the President in his firm belief in democracy never in any way intruded or meddled in the electoral process.

Governor-elect Willy Obiano (and Dr. Nkem Okeke, the deputy governor elect) is expected to resume as the next governor of Anambra state in March, 2014.