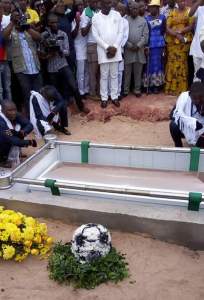 Alas! The great “Skippo”, the ” Big Boss”, Stephen Okechukwu Keshi, CON, has been laid to rest in his Illah country home in Oshimili North local government area of Delta state, amid wailing and free-flow of tears by his children, family relations, friends, colleagues, fans, sports writers and many well wishers.

The motorcade bearing the corpse of the late “Skippo” arrived the church premises at about 09:30 am with the children, family members, friends, fans and well wishers.

The Very Rev. Fr. Richard Ofere and Fr. Paschal Omono who conducted the mass disclosed that Late Keshi, who was a parishioner at the St. Paul’s Catholic Church was a calm and humble person and kept his heart close to the Lord.

Speaking in his sermon, the officiating priest, Reverend Father Richard Ofere said that although Keshi was dead after a very short interlude on earth, there was hope for Christians, as they would ressurect in the body on the last day.

Reading from the book of John, chapter 11 and 12 with the story of Lazarus ressurection, the priest reassured loved ones that “although he(Keshi) had died, death is not the end of a Christian man. We must believe in the resurrection of the body”.

Very Rev. Fr. Richard Ofere reminded the Christian faithful that death is not the end of the Christian life but a re-union with Christ. He advised them to live a life worthy of emulation, saying that Stephen Keshi’s patriotic disposition to the service of his country and hard work had earned him best global accolades.

Prayers of the faithful were said for the Late Keshi by his children.

Afterwards, his remains was moved to the Samuel Ogbemudia Stadium, where a novelty match organized by his former teammates led by former Super Eagles captain and coach Austin Eguavoen was staged between ex-internationals and all stars in his honour.

A number of players from Super Falcons national football team also featured in the march. The only goal scored was rendered by an Edo State House of Representatives members and running mate of the All Progressives Congress(APC) guber elections in Edo, Hon Phillips Shuaibu.

Fanny Amun, an ex Super Eagles coach was also sighted at the novelty march. He used the occasion to demand adequate compensation for national service.

Shortly after the novelty match, the motorcade conveying Keshi’s remains and the vehicular convoy made a brief stop at Alifikede, the boundary town between Edo and Delta states, where a team of government and sports officials led by Delta Information Commissioner, Mr. Patrick Ukah received the corpse on behalf of the state government.

Keshi’s corpse was excorted from Alifikeke by some Delta cyclists who inspite of the rains were determined to pay their last respect to the football hero. On arrival at the Stephen Keshi stadium on Nnebisi Road, the Delta state Deputy Governor, Barr. Kingsley Otuaro, Speaker of Delta House of Assembly, Hon. Monday Igbuya, House of Representatives member (Aniocha/Oshimili), Onyekachi Mrakpor, former Speakers, Martin Okonta and Peter Onwusanya, among others were on hand to pay glowing tributes to one of the most patriotic Nigerians.

On Friday, the body departed Asaba to his country home, Illah by 7am. At Illah, he was received by the Ogbelani of Illah, His Royal Highness Obi Gbemudu with his high chiefs for traditional rites as a palace chief.

Shortlly after lying-in-state at his family home, Ukpologwu Quarters, Illah, the remains of the “Big Boss” was taken to St. John the Evangelist Catholic Church, also in Illah for a Requiem Mass preceding the interment at his family compound, where he had his final rest.