DELTA State Governor, Senator Dr Ifeanyi Okowa has called for deployment of more Police personnel to ensure consolidation of the existing peace in the state.

The Governor made the call, Weekend in Asaba when he received on courtesy call, the acting Inspector General of Police, Mr Ibrahim Idris.

According to the Governor, it was a thing of joy that peace has returned to troubled areas in the state and commended Mr Idris for visiting the state for an on-the-spot assessment of security situation.

While noting that the state was relatively peaceful, the Governor emphasised, “we had security challenges but by the grace of God, they are easing off and with this visit to some of the riverine areas, we hope you will see the security challenges and hopefully we will receive more Police personnel to handle the challenges there.”

The Governor who congratulated Mr Idris on his elevation as acting Inspector General of Police, observed, “I can see that with the physical fitness in you a lot will be achieved; I believe that we will also make a lot of progress when there is timely sharing of intelligence and information because, once we have warm relationship and sharing of opinions, we will achieve a lot in having a peaceful state, a peaceful country.”

He commended the Inspector General of Police’s proposed “Eminent Persons Forum” in all Area Commands asserting that “it will help the Police have a better understanding of our people, culture and peculiar security issues and how to handle them”.

Earlier, the acting Inspector General of Police accompanied by top echelon of the security agency, told the Governor and members of the executive council including, leadership of the state legislature present during the visit that they were in the state to assess and evaluate the security situation and what their men were doing to tackle security issues.

“We want to assure you that the present leadership of Nigeria Police Force are in the service for the government and people of Delta State; we will set up eminent people’s forum for elders in all Police Commands to be involved in managing security challenges, especially those issues peculiar to their areas”, Mr Idris said, ” adding “ the Police is in the service of the people, we are your servant, we are here to serve you, I want to solicit your cooperation to make us serve you better” 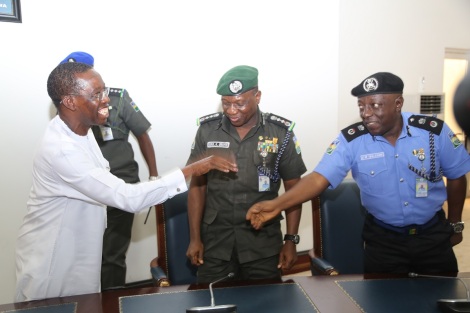